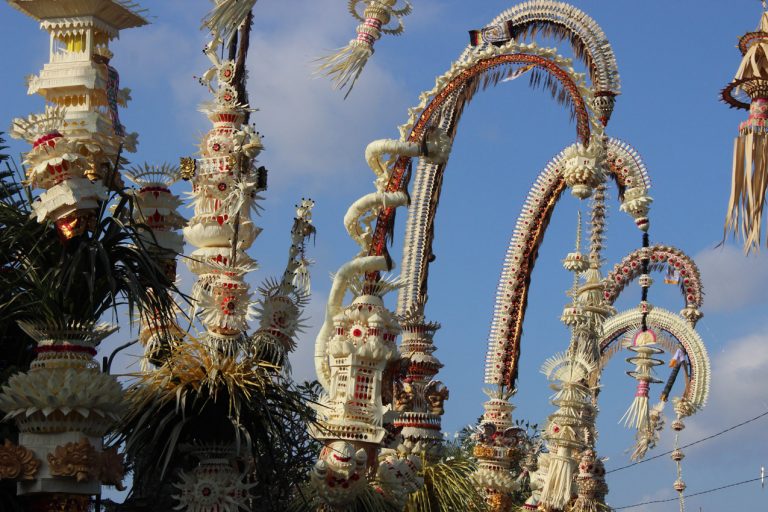 All around Bali at the moment you see ‘penjors’ being erected outside residences in preparation for Galungan.  Penjors are tall bamboo poles decorated with fruit, coconut leaves and flowers as offerings to the spirits.
Galungan is the most important event in the Balinese calendar; it is a celebration to honour the creator of the universe (Ida Sang Hyang Widi) and the spirits of the honoured ancestors. It occurs once in the 210-day cycle of the Balinese calendar, and marks the time of the year when the spirits of the ancestors are believed to visit the earth.
The festival symbolizes the victory of good (Dharma) over evil (Adharma) and encourages followers to show their gratitude to the creator and sainted ancestors.

The lead up to Galungan

The Day of Galungan

On the day itself, the Balinese return to their ancestral villages to pray at the temple and make offerings to the spirits. Women are seen carrying the offerings on their heads, while men bring palm fronds.
The Ngelawang is performed in the villages. Ngelawang is an exorcism ceremony performed by a «barong» — a divine protector in the form of a mythical beast.
The barong is invited into houses as he makes his way through the village. His presence is meant to restore the balance of good and evil in a house. The residents of the house will pray before the dancing barong, who will afterwards give a piece of his fur as a keepsake

The day after Galungan, Balinese visit their families and closest friends.
The tenth day after  «Kuningan»  marks the end of Galungan, and is believed to be the day when the spirits ascend back to heaven. This day is marked with offerings of yellow rice (Nasi Kunning).

Want a taste of Bali Culture yourself? Check out our Bali Land Tours