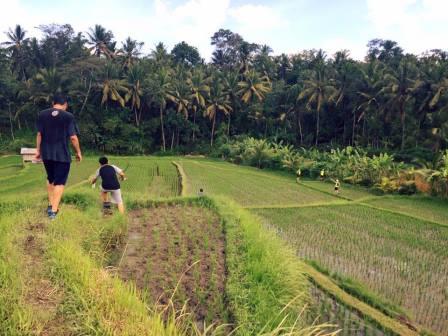 The Hash House Harriers are also known as HHH and H3 and the run a ‘Hash run’ or ‘Hash’ and the participants are ‘Hashers’, with over 2000 hash clubs all over the world including Bali.

Similar to the British paper chase, one or more members («hares») lay a trail, which is then followed by the remainder of the group (the «pack» or «hounds»). Sawdust, flour, chalk, and toilet paper are used to mark the trail.

The objectives of the Hash House Harriers as recorded on the club registration card dated 1950:
• To promote physical fitness among our members
• To get rid of weekend hangovers
• To acquire a good thirst and to satisfy it in beer
• To persuade the older members that they are not as old as they feel

Members often describe their group as «a drinking club with a running problem,» indicating that the social element of an event is as important, if not more so, than any athleticism involved. Beer remains an integral part of a hash, though the balance between running and drinking differs between chapters, with some groups placing more focus on socialising and others on running.

Generally, hash events are open to the public and require no reservation or membership, but most require a small fee, referred to as «hashcash», to cover the costs incurred, such as food or drink.

The Bali chapter of the Hash House Harriers was formed in 1977 and they run (or walk) every twice Monday and Thursday at 4.30 pm, and there’s also the opportunity to join a hash run on Saturdays as well. At the end of every run, (or walk if you want to take in the scenery), there’s icy cold beer waiting for you on Beer Bintang truck when you get back.