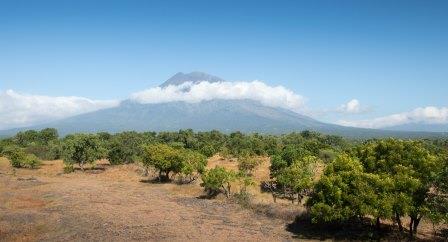 Imagine coming up off a dive to this amazing sight of Mount Agung. That’s what you see when you dive the USAT Liberty wreck in Tulamben.

Mount Agung or Gunung Agung is one of the volcano’s in Bali, This stratovolcano is the highest point on the island of Bali. It dominates the surrounding area, influencing the climate. The clouds come from the west and Agung takes their water so that the west is lush and green while the east dry and barren.

The Balinese believe that Mount Agung is a replica of Mount Meru, the central axis of the universe. One legend holds that the mountain is a fragment of Meru brought to Bali by the first Hindus. The most important temple on Bali, Pura Besakih, is located high on the slopes of Mount Agung.

From the peak of the mountain, it is possible to see the peak of Mount Rinjani on the island of Lombok, although both mountains are frequently covered in clouds.
Mount Agung last erupted in 1963-1964 and is still active, with a large and very deep crater which occasionally belches smoke and ash. From a distance, the mountain appears to be perfectly conical.
The USAT Liberty ship on 11 January 1942, was torpedoed by Japanese submarine. Flanked by US destroyer Paul Jones and Dutch destroyer Van Ghent they towed the damaged ship, attempting to reach Singaraja,. However she was taking too much water and so was beached on the eastern shore of Bali at Tulamben so that the cargo and fittings could be salvaged.

In 1963 the tremors associated with the eruption of Mount Agung caused the USAT Liberty to slip off the beach, and she now lies on a sand slope in 7.6 to 30.5 m of water, providing one of the most popular and historic dive sites off Bali. For more information about scuba diving this amazing wreck check out our Tulamben day trips.

Mount Agung is a challenging trek but can be done depending on the season, contact us on info@diving-indo.com for more details

Photo thanks to Ania