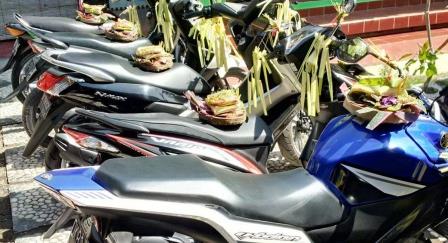 On the 9th of July 2016 everywhere around Bali you’ll see cars and motorbikes decorated with intricate stitched-leaf ornaments called ‘tamiang ‘ and ‘sampian’ as offerings for Tumpek Landep.
Tumpek Landep  is a holy day is devoted to Sang Hyang Pasupati, the God of Heirlooms. On Balinese calendar, Tumpek Landep is celebrated once in every 210 days, precisely on Saniscara Wage Wuku Landep, which on this day Balinese symbolically place offerings and the pray for metallic equipment.
Landep actually means sharp and this festival has been around since the days when traditional curvy doubled bladed swords called ‘Keris’ were made. While there are not many swords around these days, this tradition seems to have evolved to encompass all modern man-made items, in particular tools made from metal and motor vehicles
Metallic equipment is symbolically worshiped in order that it will bring safety and fortune to the owner and the user. Tumpek Landep is basically held to sharpen mind, to be implemented to do good, because Balinese believe that the highest level and the greatest weapon of human being is their mind, which can bring someone to a better life.  And by sharpening  the mind, it is hoped that it will brings more intelligence, to face and overcome the enemy from inside human’s body, such as poverty, stupidity, and many problems in life.
When the ceremony is concluded equipment is adorned with decorations and offerings, as gratitude to the Gods for great minds and knowledge. Motorbikes and cars are usually decorated with ornaments called tamiang and sampian gantung made from coconut leaf. Balinese also pray that by celebrating the Tumpek Landep holy day, the sharp mind will use the blessed equipment positively.
To find out more about the unique Balinese culture and to experience it for yourself, take a look at our Diving Indo Bali land tours
#PADIBaliBali cultureBali land toursBali toursBali traditions