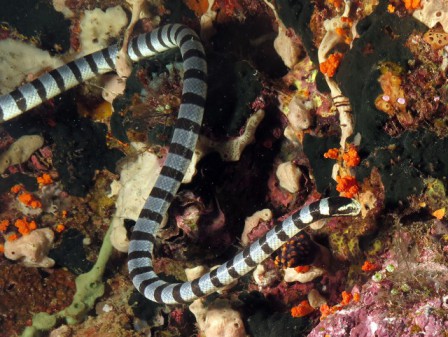 The Banded Sea Krait (Laticauda colubrina) is an expert on morphing!  It has retained the ventral scales and cylindrical body shape that is typical of terrestrial snakes, as this helps with climbing on land and in low trees, but its tail is paddle-shaped, which allows rapid movement in water. It also has large lungs so that it can spend long periods under water, as well as valved nostrils that keep out saltwater while diving, and glands under the tongue that expel excess salt. Clever huh!

The Banded Sea Krait spends much of its time on land (50{2ab15f113b077567805133d7319191ae2634a01a8c0d1dd8eae53a19b41080a1} in some estimates), to lay its eggs, rest, digest its food and shed its skin. On land, it shelters in vegetation, under beach rocks, in crevices and in caves. Hunting in the sea they are usually found in shallow tropical waters surrounding coral islands, coral reefs and mangroves, to depths of around ten metres but are capable to of diving up to 80 meters.

Females are larger than males, and larger females are more desirable to male suitors. Females lay their eggs on land anywhere between 4 and 20 eggs at a time.

The Banded Sea Krait feeds on moray and conger eels, and some squid, crabs, and fish. When they successfully locate their prey, they bite, injecting a venom of potent neurotoxins that rapidly reduce the victim’s ability to swim and breathe, making it possible for them to subdue and swallow the eel. After consuming an eel, a sea krait’s body is visibly bloated and its swimming speed significantly reduced. Realizing that they are now themselves vulnerable to predators, the Sea Kraits lumber onto land and find a safe shelter in which to digest their meal.

The Banded Sea Krait is highly venomous but it also has another defence that its tail looks like it’s head which serves to confuse predators by drawing their attack to the tail. However the eagle and the shark are known predators.
Banded Sea Kraits do not acknowledge our species as either prey or predator. Mostly they just ignore us, swim past and poke their heads into coral reefs in search of something more interesting.  Another reason for divers not to touch the coral reef!

Photo thanks to Uwe Jacobs