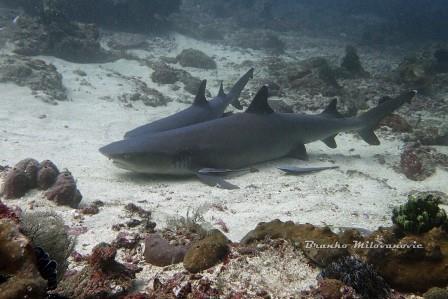 After hearing about the pregnant white tip reef shark called Georgina at Shark Point Padang Bai, I thought I’d better check her out for myself.
With nice calm waters we descended over a pretty coral reef and I came faced with a huge moray eel with its head sticking out of a hole.  The site was dotted with huge corals that are a great hiding place for white tipped reef shark, blue spotted stingray and painted lobster. Tick, tick, tick all hiding under one coral.
The conditions were gentle with a little bit of swell but this didn’t bother the huge turtle that was just hanging out not bothered by our diving party at all, after 10 minutes of posing for photos he was still in the same spot so we left him to it.
There are two very big (I can’t use the word huge again) white tip reef shark called Georgina and Adam.  Georgina got her name from a comedy where the girl was pregnant for 3 years because her father wouldn’t let her give birth until she found herself a husband.  Georgina the shark always seems to be pregnant, the fertile girl! And Adam we assume is the father.
Staying down low we were able to observe both sharks laying in the sand, then off for a little swim before settling in the same spot under a ledge with their remoras tagging along.  A very nice and close shark show.
Swimming away from the sharks a huge tuna passed us (did I just say huge again?) then just before the safety stop I spent a couple of minutes watching an octopus trying to make itself look like a rock, and succeeding.  He was just a normal size octopus, not huge.
If you want a great dive and see these resident sharks then Shark Point at Padang Bai is definitely one not to be missed.
#livetoscuba#PADIBali dive centreBali divingdive log Balidiving Baliscuba Baliscuba diving Balishark