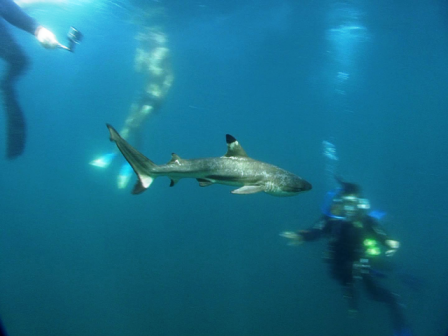 The 21st of January saw the release of 2 feisty black tip reef shark Thunder and Lightning into the Marine Protected waters of Nusa Penida.

Fishing is an activity that has been going on for generations in Bali, it is income and puts food on families plates, pays for education and healthcare.  The nets the fisherman use though are indiscriminate, larger fish can be caught but also small sharks and reef fish.  These juvenile sharks are sold at the fish market based on weight, so rather than them being killed and sold for food, Paul Friese from Bali Sharks (a non-profit organisation) pays the same amount for the live sharks as the fishermen would get at the market, so not creating a new demand which is one of the dangers when offering money.

The first litter of sharks that were saved were stuck at low tide in a seaweed farm, since then Paul and Bali Sharks have saved 160 sharks.

Paul used to release the sharks off the old stuck barge in Sanur but some sharks were re-caught. So he came to an arrangement for the shark release with Trawangan Dive in Gili Trawangan, but the long transportation time would put the sharks under unnecessary stress, especially black tips which are much more sensitive than white tips. So Diving Indo agreed to assist him to transport and release two black tip reef sharks in the Marine Protected Waters of Nusa Penida, only ½ an hour from Sanur.

The sharks were transported in water filled polystyrene tubs but there is always a few seconds that the shark is lifted out of the water before being submerged in the sea, so the sharks gills need to be ventilated with water to get them working again, this can be seen in the video before Paul releases the shark.  We didn’t have any time to film Lightening, he took off like lightening as soon as he hit the water! But we were lucky enough to be able to film Thunder’s release.  We can only hope that both male sharks now have a higher chance of survival in Nusa Penida’s Marine Park.