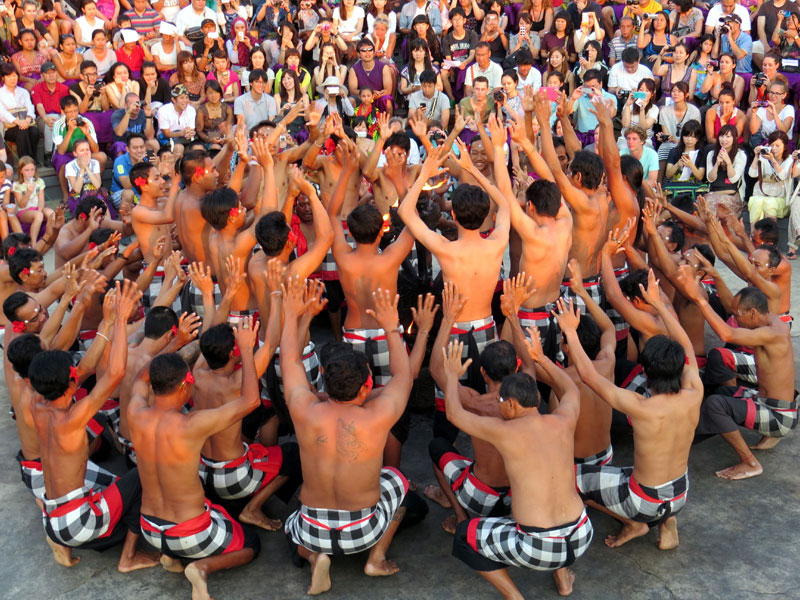 The Kecak dance is performed nightly as the sun is setting over the Uluwatu temple, one of the six Sad Kahyangan Temples, the main spiritual pillars in Bali.

The Tari Kecak dance, also called ‘the monkey chant dance’, was originally a trance ritual accompanied by male chorus. It’s based on a traditional Balinese ritual but was actually created by a German man in the 1930s and based on the famous epic Hindu story of the Ramayana is now internationally recognised as one of Bali’s top-three signature dances (alongside the Barong and Legong).

The Kecak dance is unique in that it has no other musical background or accompaniment besides the chanting of the troupe of bare-chested male dancers making a “chak-achak-achak” clicking sounds while swaying their bodies and waving their hands. From that chanting noise of “Cak-cak-cak”, the dance was given its name, Kecak.

The men form a moving circular boundary around the stage where the story of Prince Rama unfolds. The storyline generally starts from when prince Rama goes to the woods with Sita, his wife, and Lakshmana, his brother. There, Ravana kidnaps Sita and imprisons her in his castle. Rama seeks for help and sends Lakshmana to find his friend, Sugriva, the King of the Monkey Kingdom. Hanuman, Sugriva’s commander, is sent to check on Sita in Ravana’s palace and Rama finally begins the battle.

At first, Ravana wins, but Sugriva and Hanuman then come to Rama’s aid with monkey troops. Sugriva finally wins.

One of the best places to see this unique performance is with the backdrop of Uluwatu temple at sunset. This half day tour takes you to the traditional wet market and 2 famous surfing beaches before the visit to the temple and the Kecak dance, with the option of a seaside dinner at Jimberan after the show.

Click this link for more details on this trip.