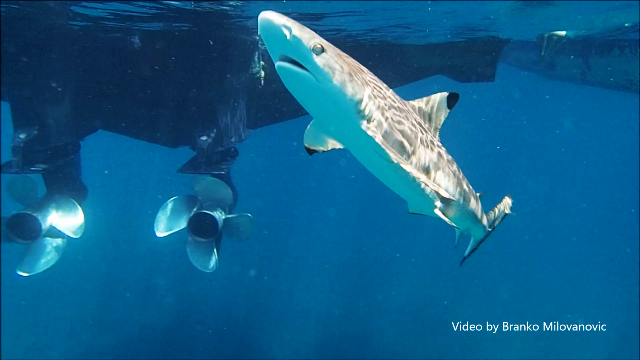 On the 16th of April Diving Indo joined Bali Sharks and 30 members of United World College of South East Asia (UWCSEA) International School from Singapore for its 2nd shark release.
2 feisty Blacktip Reef Sharks were transported via our speedboats to Nusa Penida (a marine protected area) and given their freedom by Paul from Bali Sharks who are based in Serangan. A very exciting event for the 13 8 year old students we had on board.
Both sharks fared the journey well and were soon swimming in the crystal blue waters of Nusa Penida.  Originally these two sharks were caught in the net of a local fisherman.  Too small to fend for themselves, Paul paid the fisherman what he would normally be able to get for the meat at the local market, then raised the sharks until they were a size that they had a chance of survival in the ocean.
After the shark release teachers, pupils and parents alike enjoyed snorkelling in Crystal Bay before returning to Serangan for a very unique experience of snorkelling with baby whitetip sharks and blacktip sharks in the Bali Sharks compound.
UWC South East Asia (UWCSEA) is a member of the UWC movement. UWC schools, colleges and programs deliver a challenging and transformative educational experience to a diverse range of students, inspiring them to create a more peaceful and sustainable future. UWC was founded in 1962 by the German educationalist Kurt Hahn who had a vision of bringing together young people to avoid future conflict by offering an educational experience based on shared learning, collaboration and understanding so that the students would act as champions of peace.
Here at Diving Indo we were very glad to be part of this unique shark release experience for the children and even gladder we have two more healthy sharks swimming in our oceans.
Keep up the good work Bali Sharks. Read more about Bali Sharks and their programs.
Check out a video of the release on You Tube thanks to Branko.
#myPADIProject Awaresharkshark release